Throughout the summer, many of the local towns and villages stage ‘feste’ or ‘sagre’, and as the day becomes cooler the whole population turns out to enjoy themselves celebrating local specialities or harvests of regional produce in a carnival-like atmosphere with costume, performances, arts, and of course, a jolly good meal!

‘Sagra’ means a local fair, usually a celebration of the bounties of the earth – i.e. food, as in a preparation (sagra di torta di erbe) or a raw ingredient (sagra di pesce [fish]). Larger sagre may feature musical bands and perhaps a competition of some sort. Most of them are held in small towns, usually in the main piazza.

When you drive through the Italian countryside, you’ll see colourful posters at intersections indicating the ’sagra di ……’, with the dates and times large enough to be read from a passing car. Visiting a sagra is a good way to get a taste of Italian country life. You order food to be cooked by locals with a passion for the local cuisine, then sit at communal tables to eat. 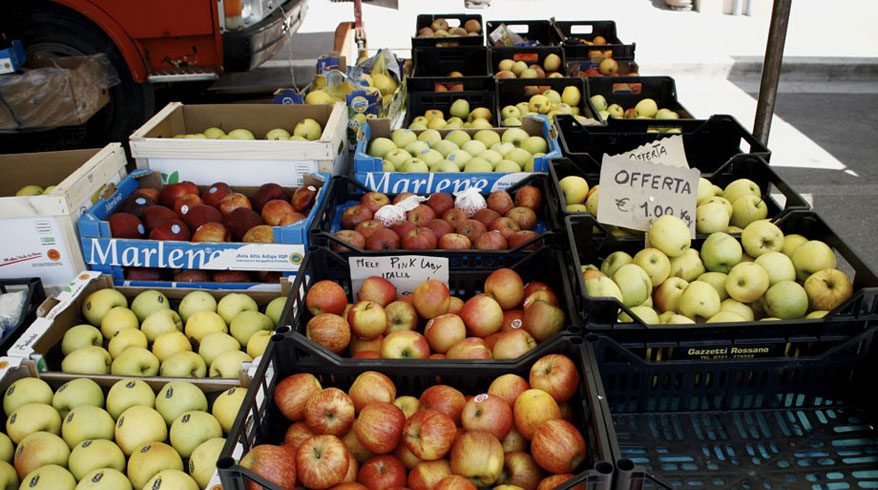 Here’s a rundown of the largest towns in the region. You can click on the names to get a full ‘guidebook’ entry for the place or go to either the places index or the clickable Marche map.

Of the region’s principal towns, Urbino should not to be missed. This jewel of a renaissance city remains little changed from the days when Duke Federico of Montefeltro set up his celebrated court here in the second half of the 15th Century.

The provincial capital of Ascoli Piceno lies at the southern end of Le Marche. This beguiling old town is well worth at least an overnight stay. Its marble-paved main square is one of the most beautiful in Italy. Don’t forget to try the world famous olive ‘ascolane’ while you’re there too.

The administrative capital of Le Marche is Ancona, a city with less obvious attractions for the tourist. Give it time, however, and you may find you enjoy the salty charm of this bustling sea port. It’s also one of Italy’s principal ferry ports with boats to Croatia, Greece and Turkey.

Another of the region’s provincial capitals, Pesaro is both an appealing seaside resort and a thriving commercial town. Pesaro boasts good shops, fine beaches and great fish.

Another of the region’s main centres is Macerata, a dignified town, famous for its annual outdoor opera festival and capital of the province of Macerata.

The alluring hill town of Fermo is the capital of the newly-created province of Fermo and boasts a fine historic centre.

Many of the smaller inland towns are also well worth visiting. These include Jesi, Cingoli, Recanati, Cagli, Camerino, San Leo, Sarnano, Amandola, and Offida.

Of the many seaside resorts, the prettiest is Sirolo on the Conero peninsula. Check out this beach guide for more details. 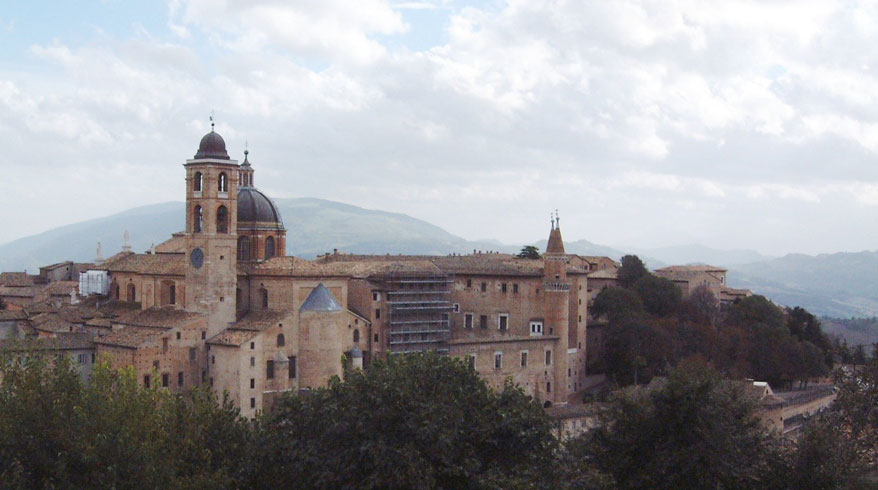 This shapely small town, set in the vineyard dotted valley of the Cesano, has a surprising wealth of churches and smart palazzi, many of which date back to the founding of the town in the 13th Century.

The church of San Francesco, in the medieval quarter of the town, was founded by contemporary disciples in 1255, less than thirty years after St Francis’ death. Many of the other churches, including the beautiful octagonal domed Santa Maria delle Tinte, date from the 17th and 18th centuries, when the town was a flourishing centre for craftsmen and artists.

But above all, Pergola is famous for the Bronzi Dorati, extraordinary gilded bronze statues of two equestrian figures and two women, which date back to the 1st C AD. They were discovered in 1946 in pieces, buried in a field. 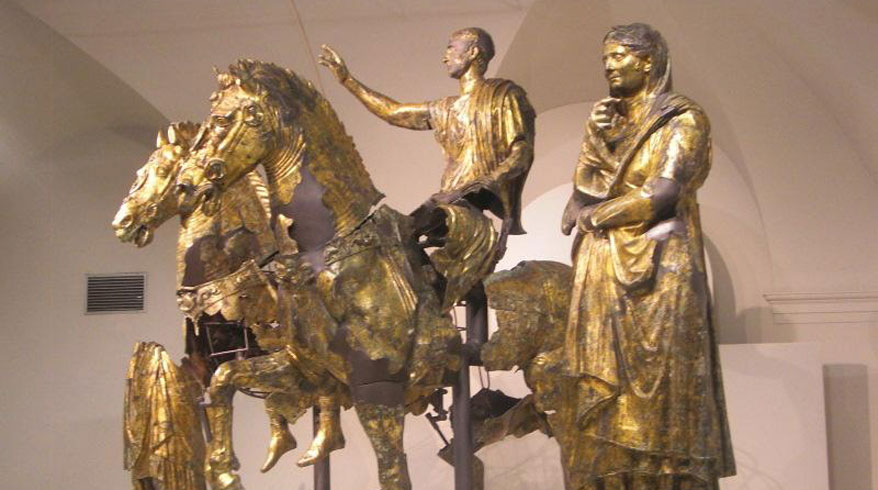 There are various theories as to who the figures represent. The most popular of these is that the statues represent Livia (wife of the Emperor Augustus, mother of Tiberius) Agrippina (wife of Tiberius’ nephew Germanicus) and her sons Drusus III and Nero and that the statues were carted away from Rome when Tiberius fell out with Drusus and Nero and ordered the damnatio memoriae which included the destruction of all images of the family.

Another theory is that they were caste in a bronze foundry at Sentinum, some 20 km from Pergola, in the 1st C BC and represent members of the family of a senator who fell into disgrace after being party to the murder of Julius Caesar in 44 BC. A long running battle has been fought between the people of Pergola and the regional archaeological museum in Ancona as to where the bronzes should be displayed. For the time being it has been decided that the bronzes will spend part of the year in the specially prepared Museo dei Bronzi Dorati next to the church of San Giacomo, while for the remainder of the time they are to be on display in the Museo Nazionale delle Marche in Ancona.

The town’s other attraction is a heavily perfumed purple wine made with red vernaccia grapes and sold either as Vernaculum or Vernacolo.

A town apparently so short of building space within its medieval walls that its early inhabitants built out over the streets, creating picturesque covered roads or “copertelle”.

The town’s Map Museum (Cartoteca Storica Regionale) holds a collection of regional maps dating back to the 1200s.

Another good reason to visit here is to try the town’s calcioni pastries with their curious sweet and sour cheese and lemon filling.

A remarkably pretty fortified hill town, all of a medieval piece. It has some of the best-preserved 15thC defensive walls in the Marche. Walk along long stretches of the battlements and admire the sweeping views.

It’s worth wondering up and down the narrow stepped streets, and visiting the shrine to St Maria Goretti, the town’s own 20thC saint, murdered in 1902 at the age of 12 by a would-be rapist whom she resisted. She was canonized in 1950 as a martyr.

The town is in Verdicchio wine country and the local cooperative winery, Val di Nevola, produces some excellent value bottles.

See the calendar of events for the local polenta feast.

The approach to Mondavio from the Via Flaminia at Fossombrone takes you through delightful rolling Marche hills. Bright geraniums and spreading cedars add a graceful tone to this beautifully preserved, red-brick medieval hill town.

The imposing fortifications (above) that stand out from afar were built by Francesco di Giorgio Martini, one of Italy’s most celebrated Renaissance military architects, and still stand guard over the place. They now house an entertaining ‘living museum’ (actually dead wax dummies) portraying life when the Rocca was built at the close of the 15thC for Giovanni della Rovere, son-in-law of Duke Federico da Montefeltro – youngsters will particularly savour the torture chamber.

It won’t take you long to wander around the compact centre and, if you’ve got time to kill, stop for an ice-cream and fine views at the bar in the little shaded park near the square.

Above the modern village stands a steep hill with just enough room on top for an imposing castle and medieval borghetto. As the last of a string of natural defences running from the sea to the impregnable Apennines, it has been fortified since the pre-Roman days when the area was garrisoned by the Eugubine tribes from Gubbio.

The well-restored rocca later helped to defend the southern border of the Duke of Montefeltro’s lands and some consider the triangular tower at the western end to be the work of Duke Federico’s favourite architect, Francesco di Giorgio Martini.

This windswept look-out (note the size of the rocks on the roofs to stop the tiles blowing away) gives a splendid view across to the majestic peaks of Mts. Catria (1,700 metres) and Acuto (1,527 metres).

Since 1853 Senigallia has been one of the most popular seaside resorts on the Adriatic Coast with its thirteen kilometres of golden sands, the famous Velvet Beach.

Thanks to the quality of the services it provides and the clean and safe bathing, the town has been awarded the prestigious Blue Flag of the Foundation for Environmental Education in Europe. But the sea is not the only reason for choosing Senigallia. It has a beguiling old centre and offers an ideal base for exploring inland Marche towns.

Although its prosperity nowadays depends on the tourists, it is a town with a long history. Its name bears witness to its earliest inhabitants – the Galli Senoni, a Celtic tribe who settled here around the 4thC BC. In the 15thC is was widely celebrated for its enormous commercial fair – the Maddalena Fair.

Still today its old centre has a certain solid mercantile grandeur, particularly in the tall old blocks that line the canal. While wandering through the lanes of the centre also notice the low, thick-walled style of many of the buildings – specially designed in centuries past to avoid earthquake damage.

The finest monument is the old fort, the Rocca Roveresca, built in 1480. In the summer its courtyard echoes to the sound of classical music concerts.

Senigallia’s other great pride is the number of good restaurants where you can, naturally, eat the best of the Adriatic catch. 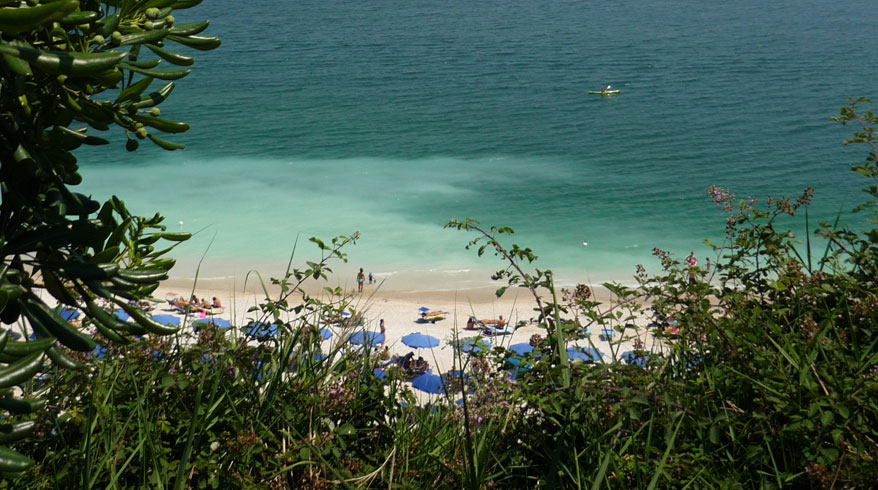 Many tourists visit Le Marche for its natural beauty and most of the spectacular inland mountain country remains unscathed by the worst excesses of the 20th century. Explore this nature page for a run-down of the region’s nature parks.

These are the major sights that should not to be missed:

You’ll find some of the most impressive mountain scenery to the south of the region amidst the Monti Sibillini, whose peaks are often covered with snow until the late spring.

The Frasassi caves are some of the most spectacular limestone caves you are every likely to visit.

Limestone again is the leading player at the Furlo Gorge, a dramatic natural pass through the mountains that has been in use since prehistoric times.

Most of Italy’s Adriatic coastline is stubbornly flat. Monte Conero, just south of Ancona, is a rare exception – a high limestone mountain that plunges into the sea and guards a handful of delightful little bathing resorts.

The best mountain views to be had in the north of the region, on the doorstep of Urbino, are around the giant Monte Catria. In spring the upland meadows are carpeted in alpine flowers. 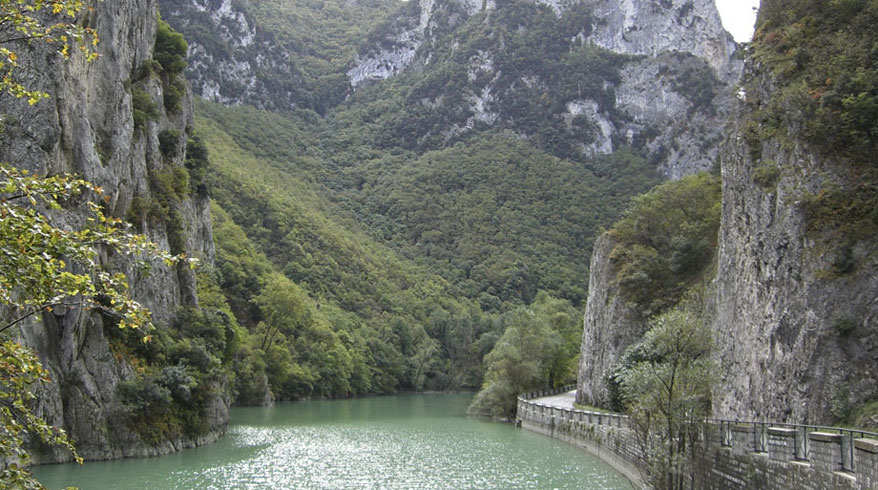